Oh man, am I ever tired.

Renovating a house is the ultimate in “lifestyle” fitness (of which Jordan is a great advocate). Yesterday, for 10 hours, I did squats, shoulder presses, chest presses, and cardio. Today, I feel like a limp noodle.

But we got SO much accomplished in just a few short days!

Friday afternoon, after my final exam (!) of my Master’s (!!!), I went straight to the house and J. and I tried to get a good picture of exactly what we wanted to do on Saturday, with all our amazing helpers.

The biggest decision we made was what to do with the walls. So, after trying a number of very frustrating and unsuccessful methods, I felt I had a good grasp of the technique required to strip the wallpaper. I had managed to reveal enough of the wall underneath so that our contractor friend, Jay, could come over and take a look at it and give us our options as to how to finish the walls.

He didn’t recognize the under-layer, so got his dad on the phone. After texting over a photo, we heard Jay’s dad say, “Ohhhh that stuff is the worst.”

We discovered that under the seven layers of brittle wallpaper lay cement board. It’s about a 1/2 inch of cement covered in paper on either side. The panels are about 3 feet wide, and are sealed with nails and a plaster-like seam. 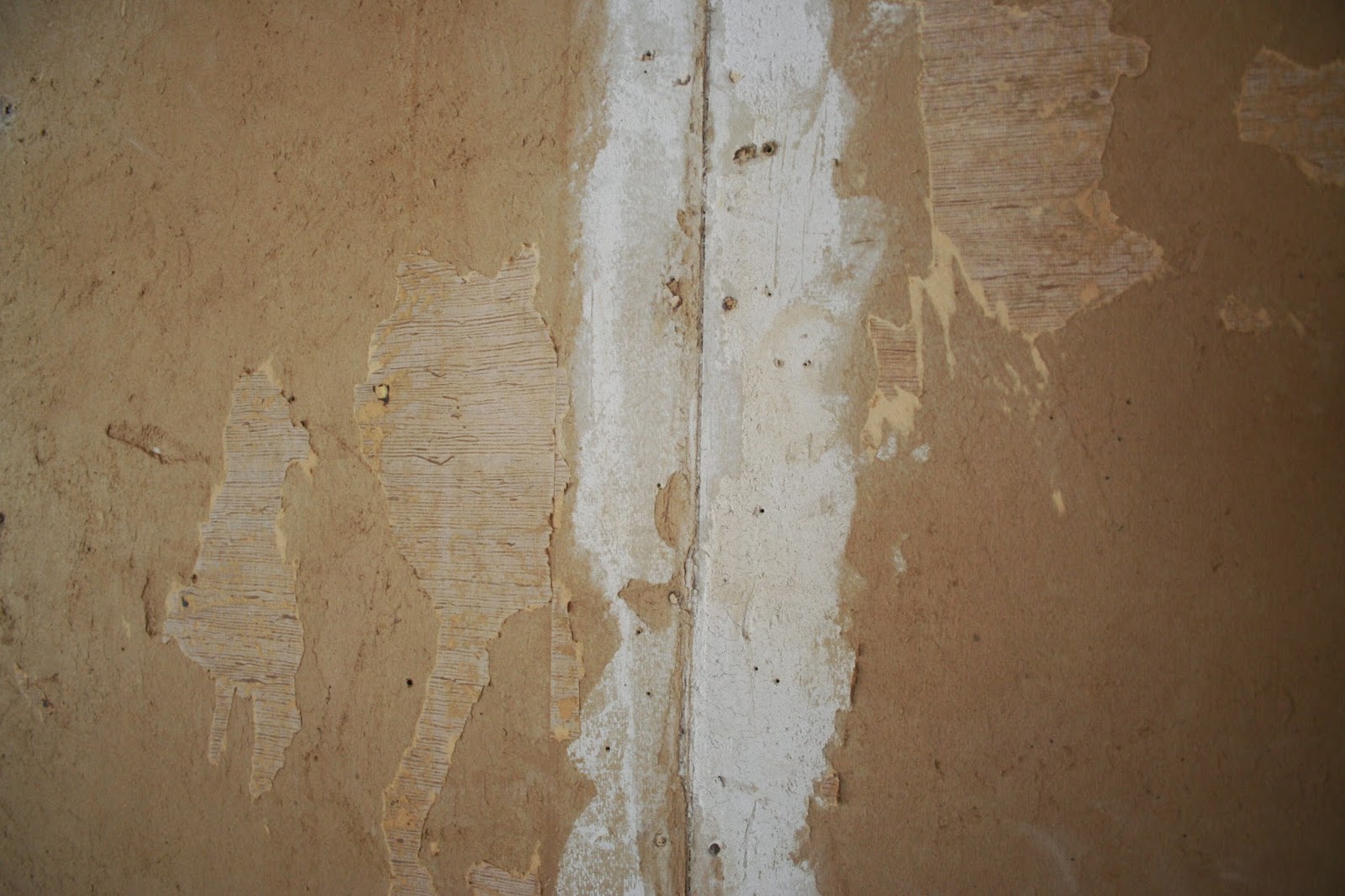 Our options, after talking them over with Jay, were:

1) Tear out all the cement board, replacing it with drywall. While this would be doing it “right,” it would cost the most, cause a TON of debris, and you never know what you will find behind those walls!

2) Simply put up a layer of 1/4″ drywall OVER the existing walls, wallpaper and all. This would be the fastest and simplest option. However, we’d lose some depth on our beautiful baseboards and millwork around the windows and doors.

3) Strip all the wallpaper, sand all the surfaces smooth, nail in all the rusty nails flush with the walls, paper tape all the seams, and put a skim coat of mud over all the walls. This is by far the most labour-intensive option, but would cause the least waste of materials. However, once everything’s mudded and painted, the surface would also have a slight “ribboning” effect, which means that if you run your hand over the surface, you would feel a slight bump at each seam.

Option 1 wasn’t really an option for us, considering the cost and time it would require. Jordan was drawn to Option 2, but I felt strongly and morally opposed to simply covering up the wallpaper nightmare. I would ALWAYS know it was there, lurking underneath the drywall. Jordan was reluctant to consider Option 3, saying “it’ll take you a week to strip all that paper!”

My method for taking off the wallpaper consisted of scoring, spraying, and then stripping it.

First, we took a scoring tool and poked tiny little holes in the wallpaper. (Pro tip #1: Do NOT give the wallpaper stripper to your biggest, burliest friend. Ahem, RYAN. It is likely he will be too exuberant, causing the tiny plastic wheels on the scoring tool to overheat and MELT. Pro tip #2: If you take said broken tool back to the store within an hour of buying it, the nice people will probably replace it for you. No charge.)

This is the “Wax on, wax off” stage of Grasshopper training. 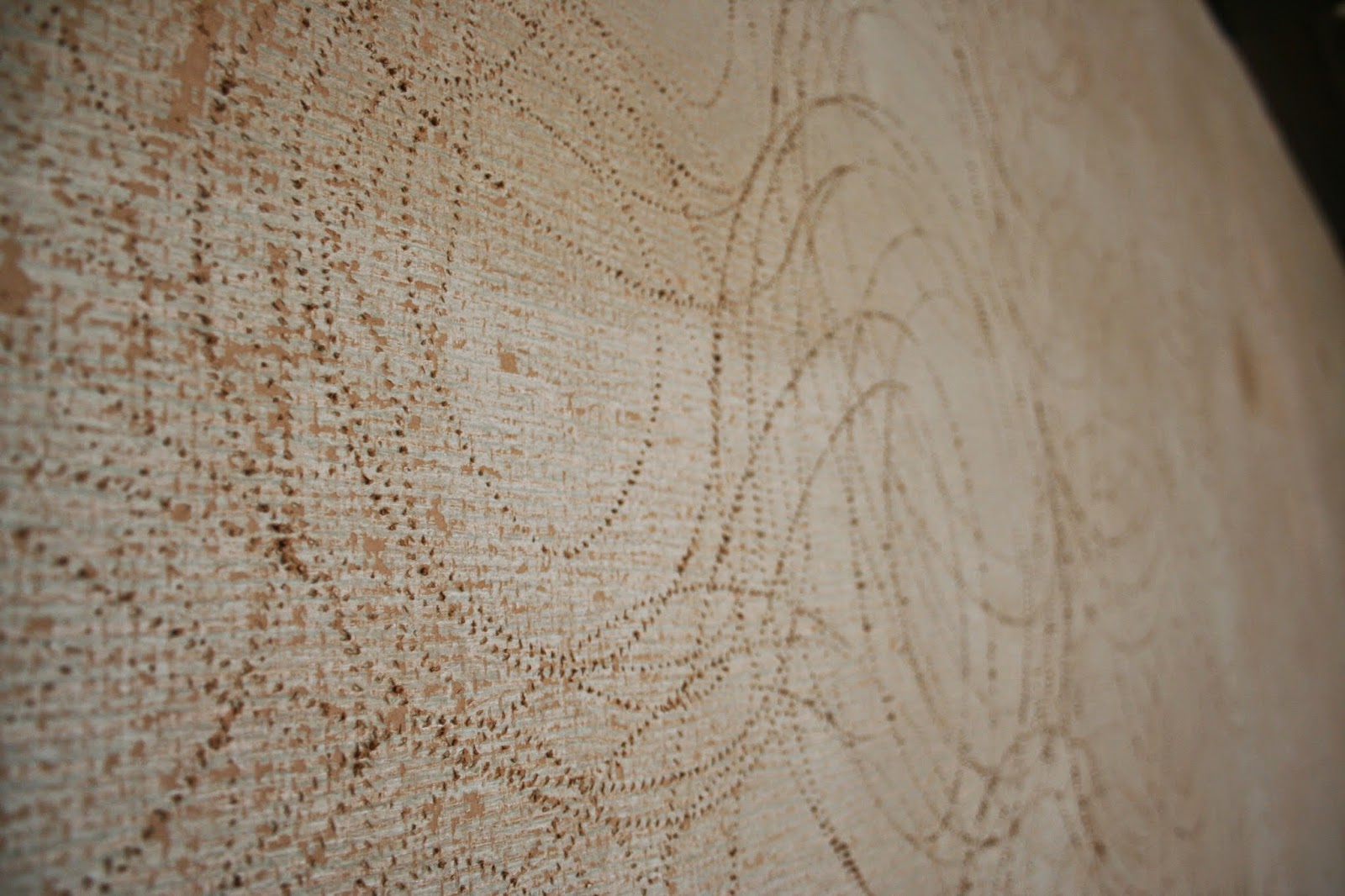 Then, wearing a respirator mask, you spray warm water mixed with a concentrate of wallpaper stripper solution on the walls to soak it through. (Without the respirator, you get a wicked sore throat. NOT GOOD for singers!) Wait until it drys. 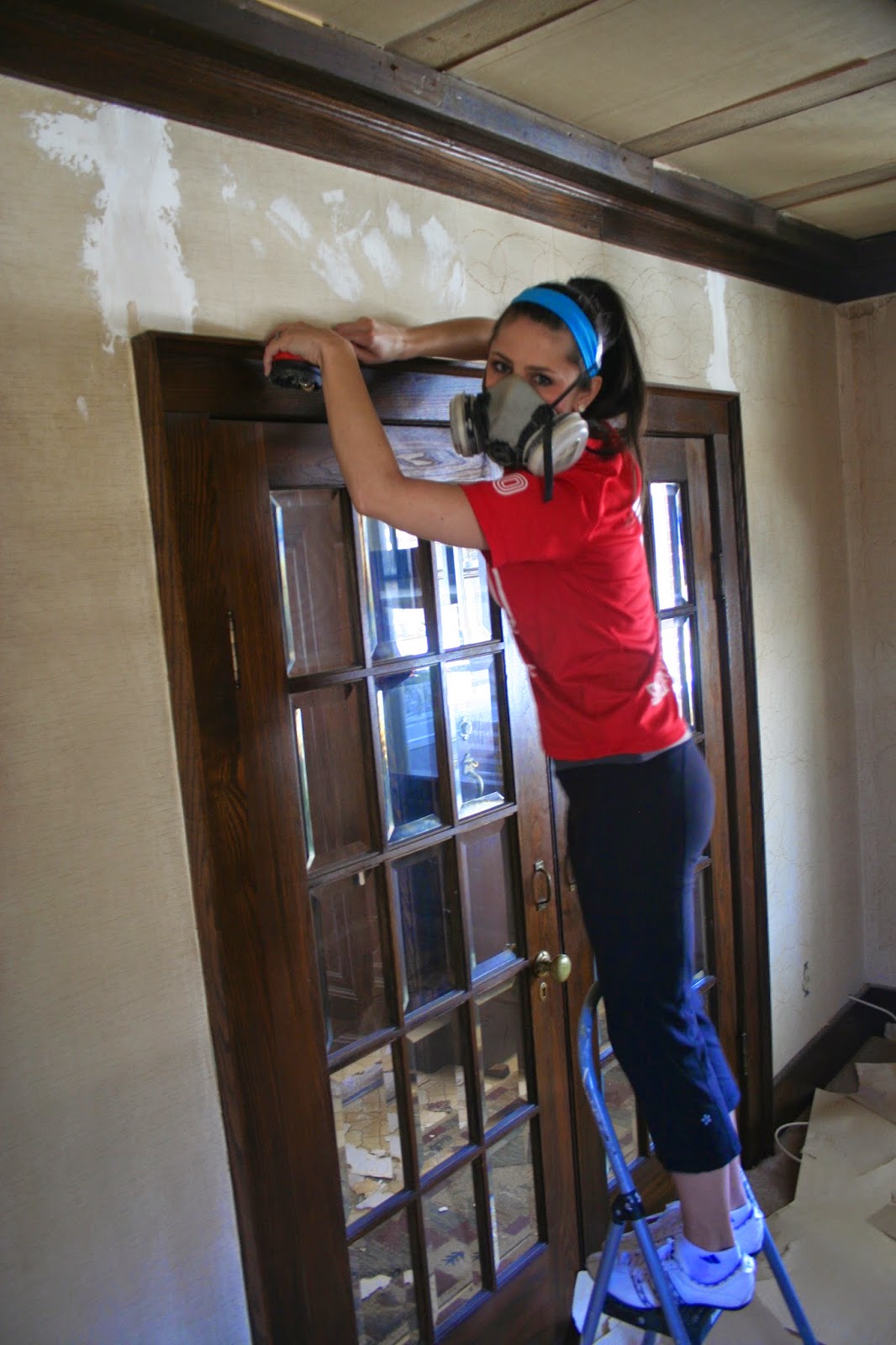 Then, using a stainless steel putty knife, we found the seams of the panels, because the wallpaper for some reason doesn’t stick as well to the seams. Once we revealed the seams, I could slip the edge of the putty knife under the lowest layer of wallpaper, and with any luck, strip it off in chunks. And here’s what the finished office looks like, sans wallpaper: 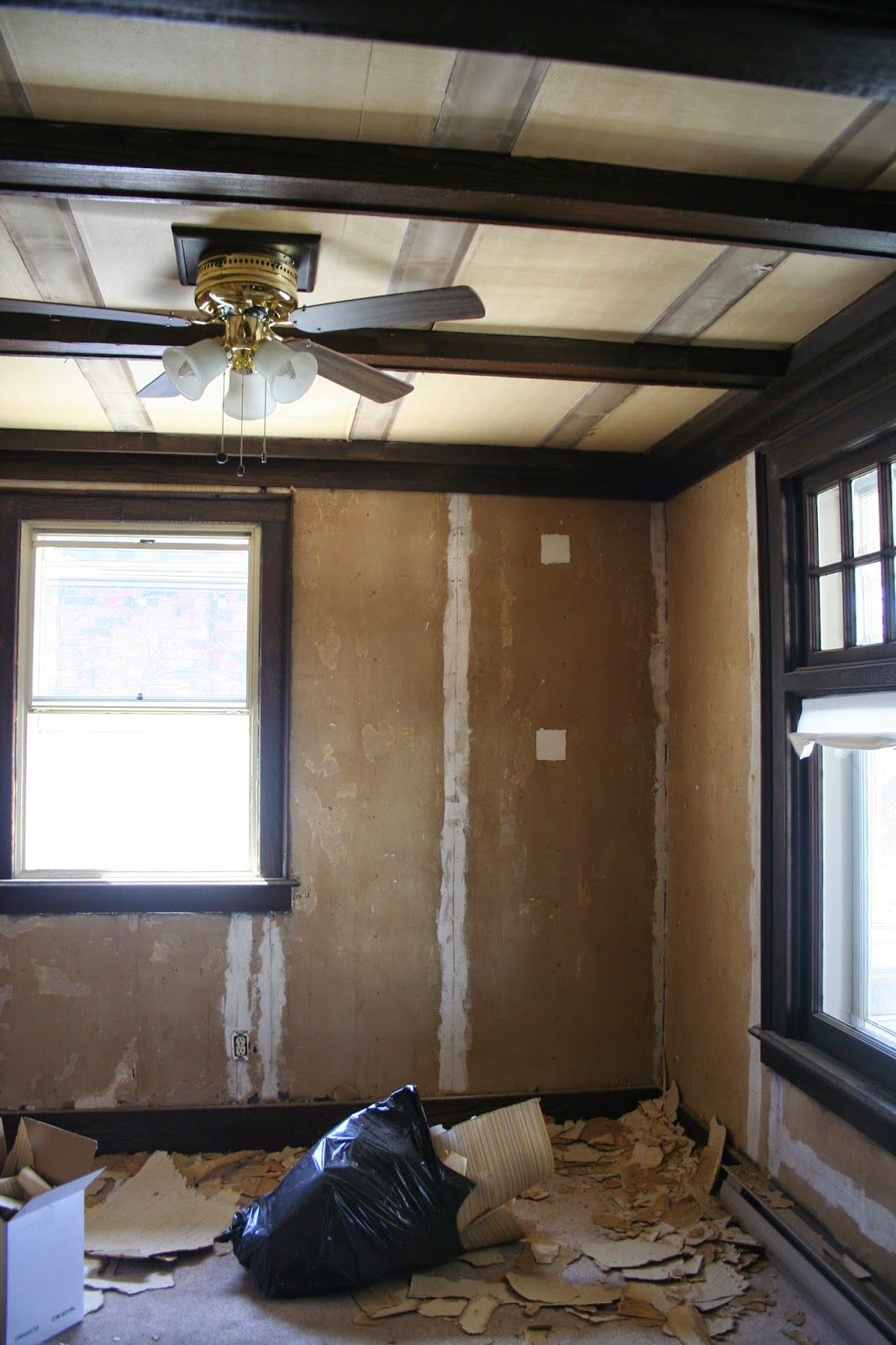 Ryan and I got this room done in a couple hours! I felt very proud of us.

The master bedroom had it’s own six layers of wallpaper, including a super dark floral layer and a layer of blue paint. However, the wallpaper in that room isn’t coming off easily. I think it will require a couple rounds of scoring and spraying to really start to come down.

However, once Amalea and I got into the living room, the wallpaper in there came off like a dream! After scoring and spraying and letting it dry for a couple hours, we were able to take the paper off the whole room in less than an hour! THAT was satisfying.

So even though we will eventually have slight bumps in the wall from the seams of the cement board, I think we will be really happy with the final result.

Our friend Jim came back and helped Jordan cap off the water in the kitchen. Then they took out the rest of the kitchen. Here’s what it looks like now, but that big beam at the end of the dining room ceiling also came down: 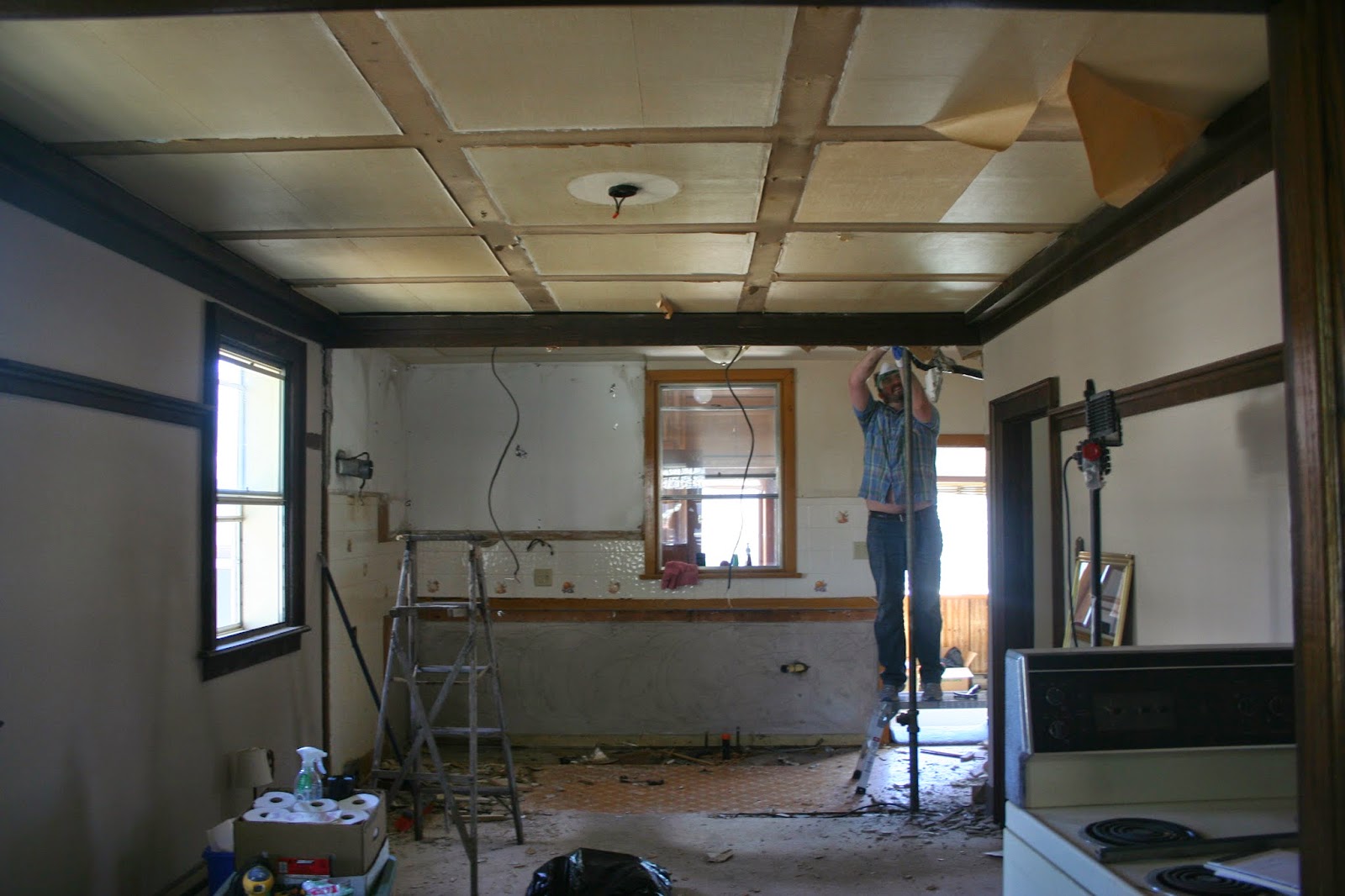 In the basement, Jordan and Pete took down some of the ceiling so we can run some electrical through for the kitchen. 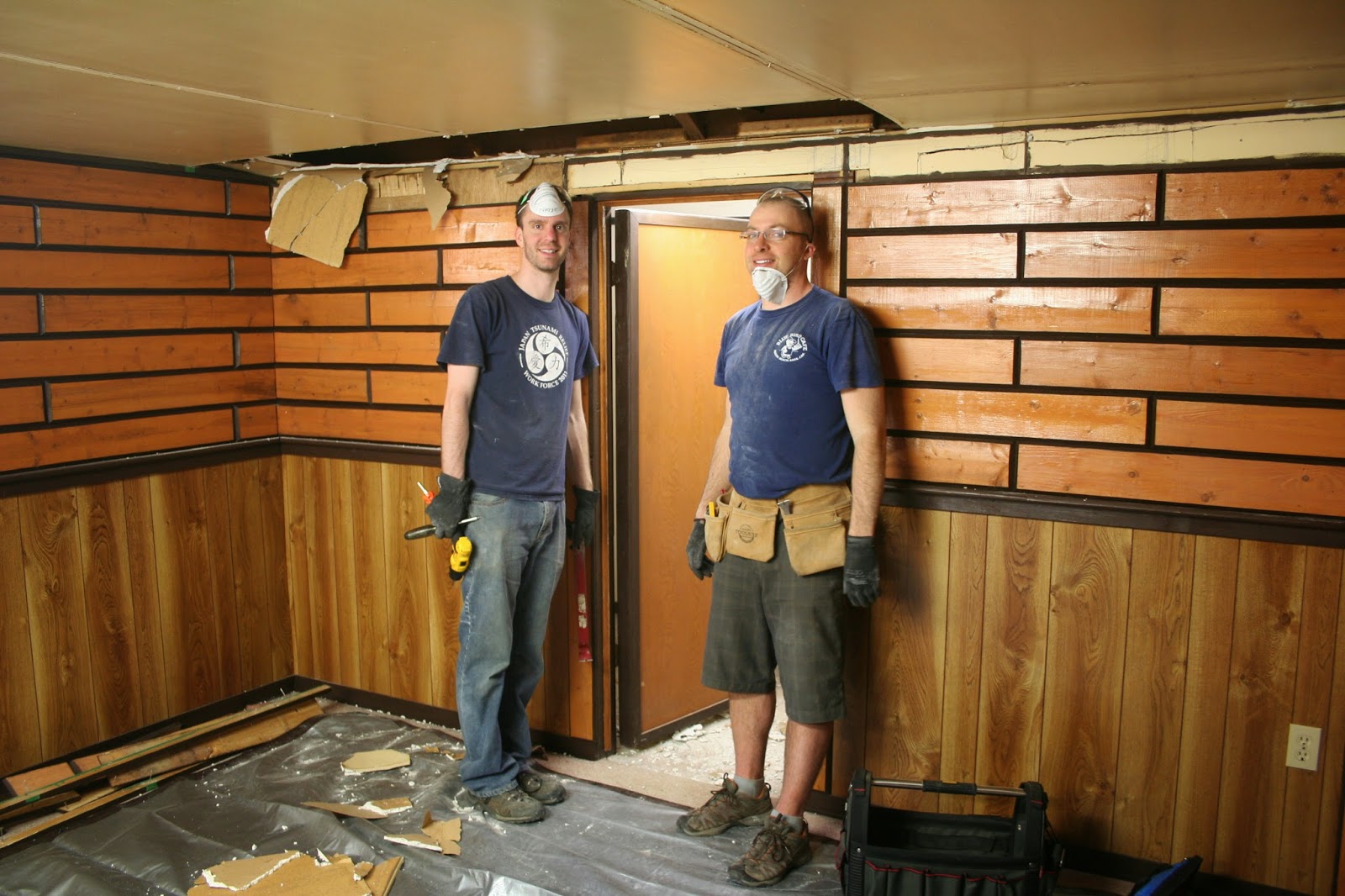 So here’s a current look from the living room through to the dining room: 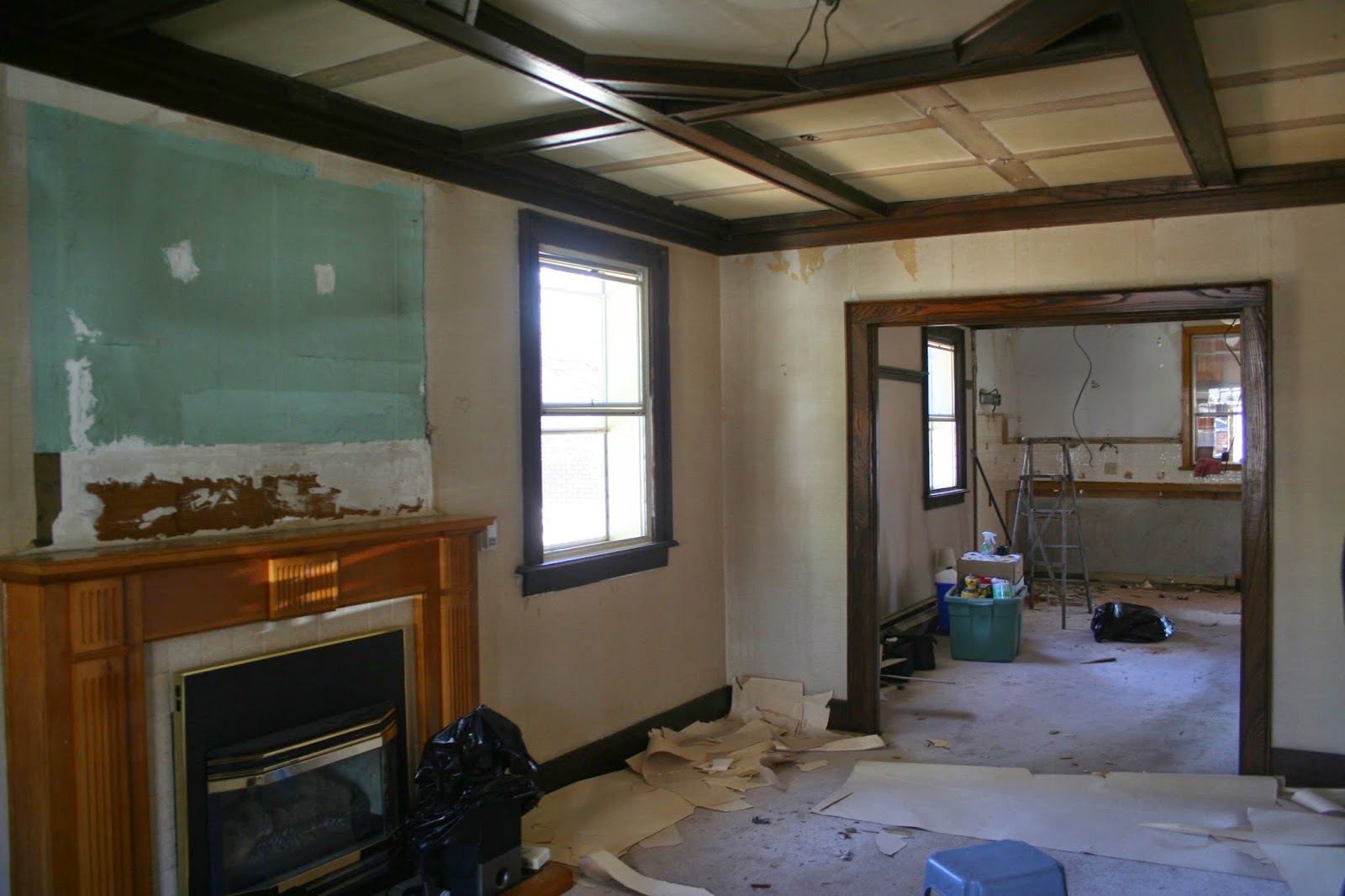 Mama and Papa K. came back through the house after our initial demo day, and were so impressed with how much had changed. We are so blessed to have had such amazing help yesterday! 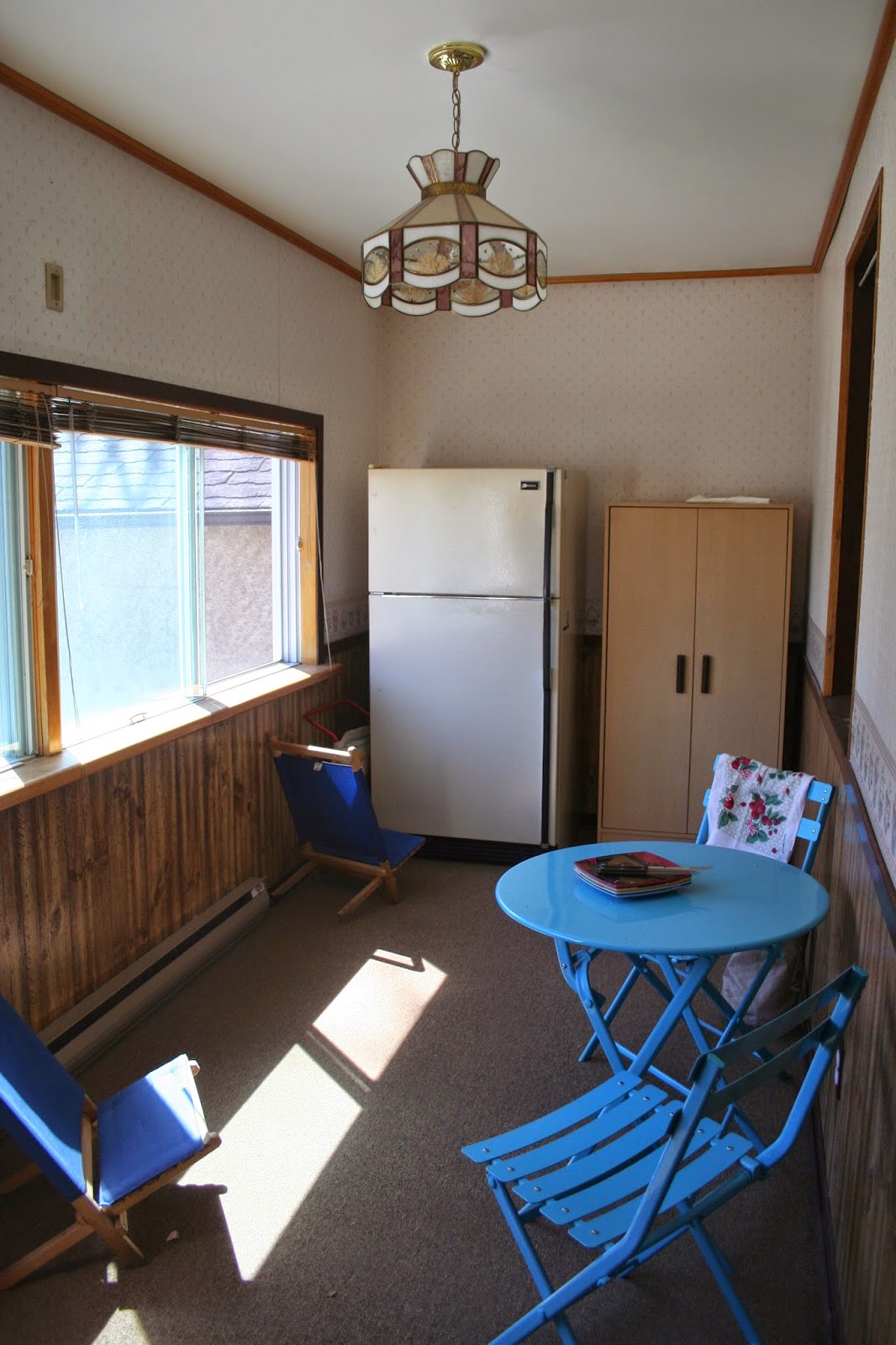 Tomorrow we’re making a run to Ikea to order our kitchen! It’ll be good to have a day off from the manual labour!

UP NEXT: chiseling tile out of the kitchen and stripping the last of the wallpaper!